What Growth Teams can learn from complex systems.

What Growth Teams can learn from complex systems.

Many growth teams and founders don’t understand why growth is not predictable, and foremost, why some of the tactics we are implementing aren’t having an impact on company growth.

Frameworks and methodologies for growth should endeavor to recognize that companies are complex systems.

«The Blind Men and the Matter of the Elephant» is the perfect metaphor for how growth teams must consider organizations as complex systems and the relevance of having a holistic view of the customers in order to achieve transformational growth.

The Blind Men and the Matter of the Elephant.

Beyond Ghor, there was a city. All its inhabitants were blind.

A king with his entourage arrived nearby; he brought his army and camped in the desert. He had a mighty elephant, which he used to increase the people’s awe.

The populace became anxious to see the elephant, and some sightless from among this blind community ran like fools to find it.

As they did not even know the form or shape of the elephant, they groped sightlessly, gathering information by touching some part of it.

Each thought that he knew something, because he could feel a part. . . .

The man whose hand had reached an ear. . . said:

“It is a large, rough thing, wide and broad, like a rug.”

And the one who had felt the trunk said: “I have the real facts about it. It is like a straight and hollow pipe, awful and destructive.”

The one who had felt its feet and legs said: “It is mighty and firm, like a pillar.”

Each thought that he knew something, because he could feel a part.

Each had felt one part out of many. Each had perceived it wrongly. . . .

This ancient Sufi story was told to teach a simple lesson but one that we often ignore: The behavior of a system cannot be known just by knowing the elements of which the system is made.

There is a direct connection between this Sufi story, companies and growth teams.

In companies, we are blind.

Every area in the company has a partial view of the organization and customers.

Every person is tasked with a different part of the funnel, analysing only a portion of the data.

There are different metrics for every person depending on what part of the funnel is working.

Would it be possible to frame it differently in order to have a complete picture of customers?

1.Data is the building block for an unified view of businesses.

2.Incorporating data strategies to have a single data source of trust and a 360-degree customer view across areas to provide us with new perspectives to better understand our customers.

4.The definition of new company metrics to reflect this holistic view of an organization and customers.

5. Being aware that isolated actions taken within each stage of the AARRR framework will not lead to a growth stage. Growth is a complex process in which multiple and simultaneous actions taken can potentially guide us in a new growth direction.

In order to further understand our business and customers, we need a holistic view of them.

d·df is an innovative office with the mission to help businesses in their growth, mostly through the implementation of data strategies, innovation and the development of AI-driven solutions. 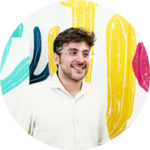